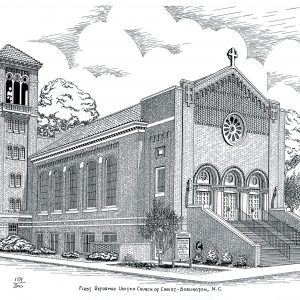 First Reformed United Church of Christ began in Burlington in 1889 as part of a three-point charge of the Reformed Church of the United States. Rev. Jesse Richards of Lakeside, Ohio, was commissioned as a missionary and pastor for the three churches. Eleven founding members met in a large white building used by several religious bodies in the Burlington community.

On February 13, 1900, the congregation purchased a site at the corner of Front and Tarpley Streets for a new building. On this site, a brick church was built with an auditorium and two classrooms. The church opened on January 6, 1901. Sunday school rooms were added in 1909. A new parsonage was built immediately behind the church in 1917.

In 1951, the congregation helped organize St. John’s Evangelical and Reformed Church in the Grove Park Community.

In 1955, Edgewood United Church of Christ became a new church start sponsored by the congregations of First Christian and First Evangelical and Reformed.

In 1997, the church applied for a grant to construct The Willows on land owned by the church on Tarpley Street. The Willows, which provides housing for seniors with limited incomes, opened in 1999.

In 2002, the church received a generous endowment from Marvin and Eva Clapp, two members of the church.

In 2004, the congregation began extensive renovations of the entire church and installed an elevator to provide handicapped access to all levels of the building.

The renovations have allowed the church to share spaces with community groups, and today the church is honored to host the following groups and organizations: